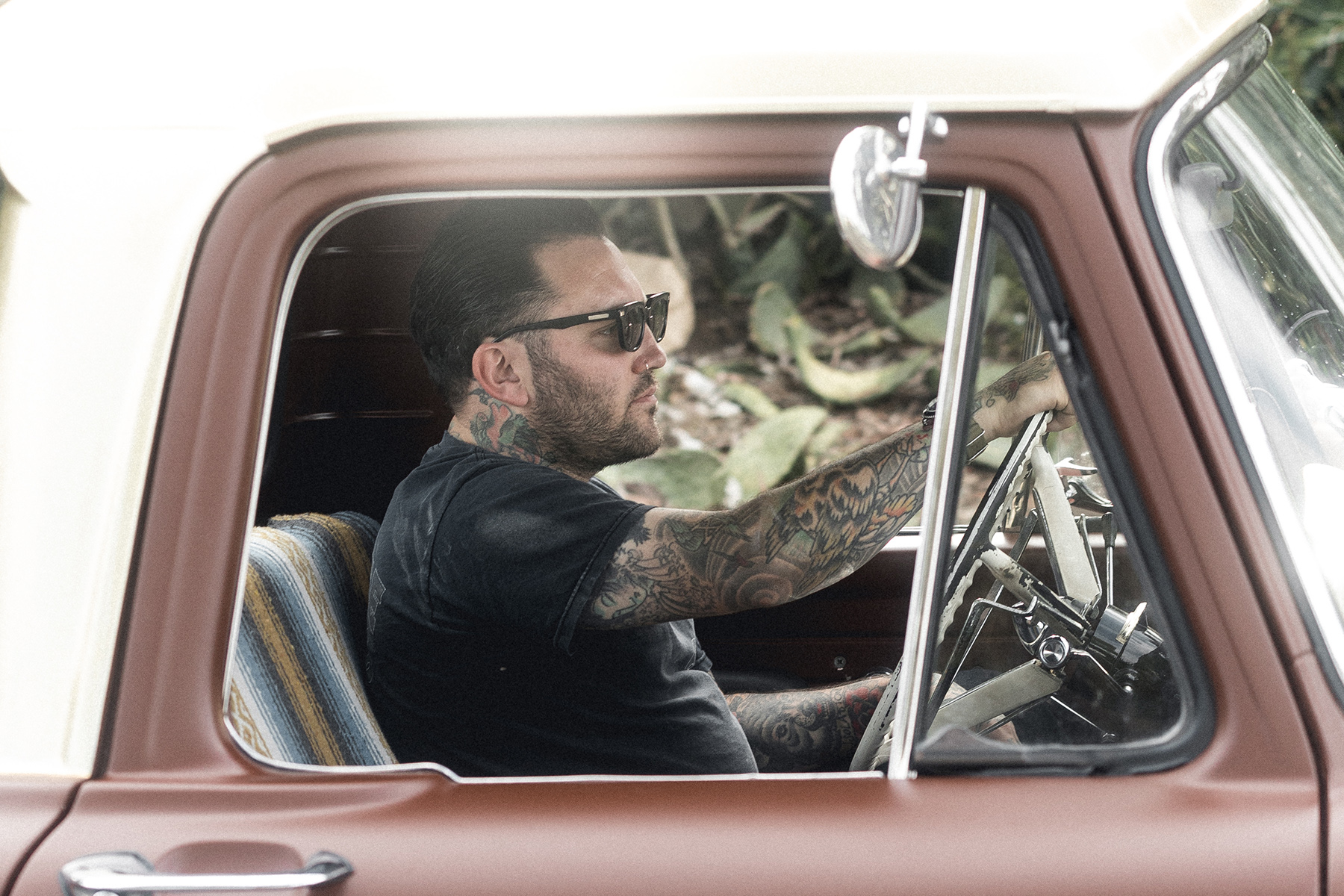 One of our favourite stores on Smith Street in Collingwood, URAHARA has just turned five. Originally known as Godspeed, and over the years it has become a staple to the Melbourne streetwear and men’s clothing scene. The store has been located in many of Melbourne's iconic venues and finally settled back to its northside roots. We sat down with founder and good friend, Marty Kirby to chat about the new name and what lays ahead for 2022.‍

CAN YOU TELL US A LITTLE BIT ABOUT WHY YOU DECIDED TO CHANGE THE NAME OF THE STORE?

Yeah! It’s been a turbulent last few years but we are still here. People have always been super supportive of the Godspeed branded products that we have released in the past and insisted that we further the brand. In making the jump to bigger and better products we need to meet minimum order quantities of our factories in Japan which is honestly a little daunting sometimes! We made the necessary call to differentiate Godspeed (the brand) and URAHARA the store with the intention of having Godspeed stocked in a handful of other retailers around the world!‍

YOU’VE FINALLY FOUND A NEW HOME, BACK AMONGST WHERE IT ALL STARTED IN MELBOURNE’S NORTH SIDE, WHAT’S THE BIG DRAW CARD TO THIS NEW LOCATION?

The need for a bigger space mostly, this store is by far our biggest and we have just finished expanding a little more to include the second floor of the building. In hindsight we are super lucky to have found our final resting place back in Collingwood as I don’t think we would have survived the pandemic if we were in the city! It’s also great to be back amongst our people, this neighbourhood is truly unique in a global sense and we are proud to be a part of it.

YOU’VE BEEN INSTRUMENTAL IN BRINGING IN BRANDS TO AUSTRALIA. DID THAT EVER FEEL RISKY? DO YOU FIND MELBOURNIANS ADAPT PRETTY QUICKLY TO LABELS YOU’D TYPICALLY FIND OVERSEAS?

Risk is just a matter of perspective… I’ve invested everything I’ve ever had into the store without financial support from banks or lenders and have often been questioned, criticised or even pitied which is, at times, probably entirely fair. The thing is that I believe in what we are doing wholeheartedly and will always persevere.

I think Melbourne definitely ‘gets it’ more than other cities and the heavy nature of most of our clothes and boots works best for us geographically. Sometimes we do struggle to buy some of the cooler pieces from the Japanese because we don’t think it will work here. So there’s small risks in purchasing some pieces for the store, but there is always someone that they will speak to!

THERE HAVE NOW BEEN FOUR LOCATIONS YOU’VE OPERATED OUT OF OVER THE YEARS. EACH HAVE BEEN REALLY DIFFERENT BUT YOU’VE MANAGED TO KEEP THE SAME VIBE AMONG THEM ALL. HOW DO YOU PULL THAT OFF?

We have recycled or up-cycled most elements of each store which has helped. It has definitely been a challenge to build the stores by ourselves on a budget and have the space do justice to the quality of products that we sell. The sick part is that as challenging and emotionally draining as it’s been I have always really enjoyed it… even if I don’t show it. Mostly, I have had a vision for each space and we have built that vision without much planning or reflection which I guess is pretty cool. Though it would also ben ice to have a space entirely designed and built by professionals.

WE SEE A LOT OF BOOTS GETTING UNLOADED FROM TRUCKS AT YOUR NEW JAUNT, WHAT’S UP WITH THAT?

Yeah you do! We have just finished renovating the second floor of the store which features two new rooms. One is an expansion of the ground floor with a further range of clothes and accessories and the other is a dedicated ‘boot store’.  The boot store is something we’ve wanted to do for a long time and we are finally there. We are introducing some of the worlds best boot and footwear brands to Australia for the first time so it is super exciting.

THERE’S NO HIDING MUSIC HAS PLAYED A BIG ROLE IN YOUR PAST LIFE. HOW HAS THAT TRANSLATED MOVING BETWEEN THE LIVE MUSIC LIFE TO STARTING YOUR OWN SHOP AND NOW BRAND?

I think in doing the band I learnt a lot of valuable life lessons and was essentially running a business… though I never thought of it that way. We toured, and often returned to, over 30 countries in all seasons. Travelling at such a young age enabled me to get an early understanding of how different cultures and economies work which has definitely helped with aspects of both running the store and doing international business. Finally a lot of old friends and fans of the band are still supportive of both the store and Godspeed brand which is really cool and I'm eternally grateful for that.

‍CAN WE EXPECT TO SEE GODSPEED SOLD OUTSIDE THE FOUR WALLS OF URAHARA ANYTIME SOON?

Definitely. Now that we are back open and trading I can put the tools down and shift my focus back to Godspeed by partnering with international retailers and furthering the offerings from the brand. If we can manage to be stocked by other retailers we will be able to meet the requirements of ordering special fabrics and initiating production runs of garments so it really is the biggest step in the next phase of Godspeed.

SMITH STREET HAS JUST BEEN NAMED COOLEST STREET IN THE WORLD (COINCIDENCE THIS HAPPENED ONCE YOU OPENED YOUR STORE, MAYBE, MAYBE NOT) BUT WHAT GETS YOU EXCITED ABOUT BEING SITUATED IN THE NEIGHBOURHOOD?

Hah! It’s a little bit of a reach but it’s definitely good for the street and neighbourhood in general. Smith Street definitely has a good feel to it. We are surrounded by some of Melbourne’s greats such as Burnside Coffee, Northside Records and The Searchers, Trippy Taco, Wabi Sabi Salon, Falco and Shop Ramen to name a few. It’s a supportive community of unique small businesses so you can’t go wrong really!

WHAT ELSE IS ON OFFER AT URAHARA AND WHAT CAN WE EXPECT TO SEE OVER THE NEXT FIVE YEARS?

I think things are just getting started for us which is a little bizarre to think. The first five years were about survival whereas the next five years will be full of collaboration. I think collaboration is really important to get your brand in front of people. Working with and learning from others is something that really excites me and I’m lucky enough to know a whole bunch of incredibly talented designers and artists so let’s see what happens! 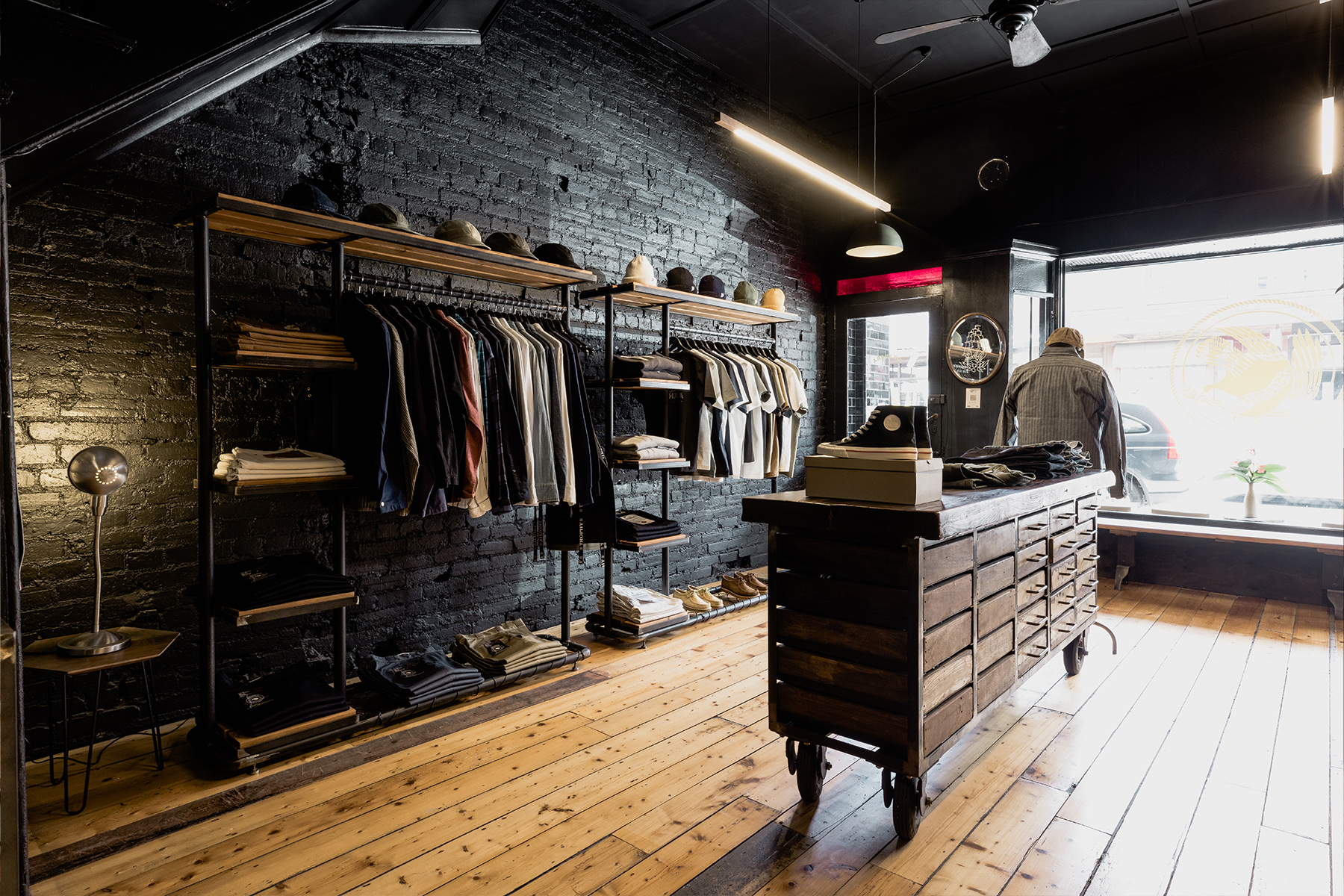 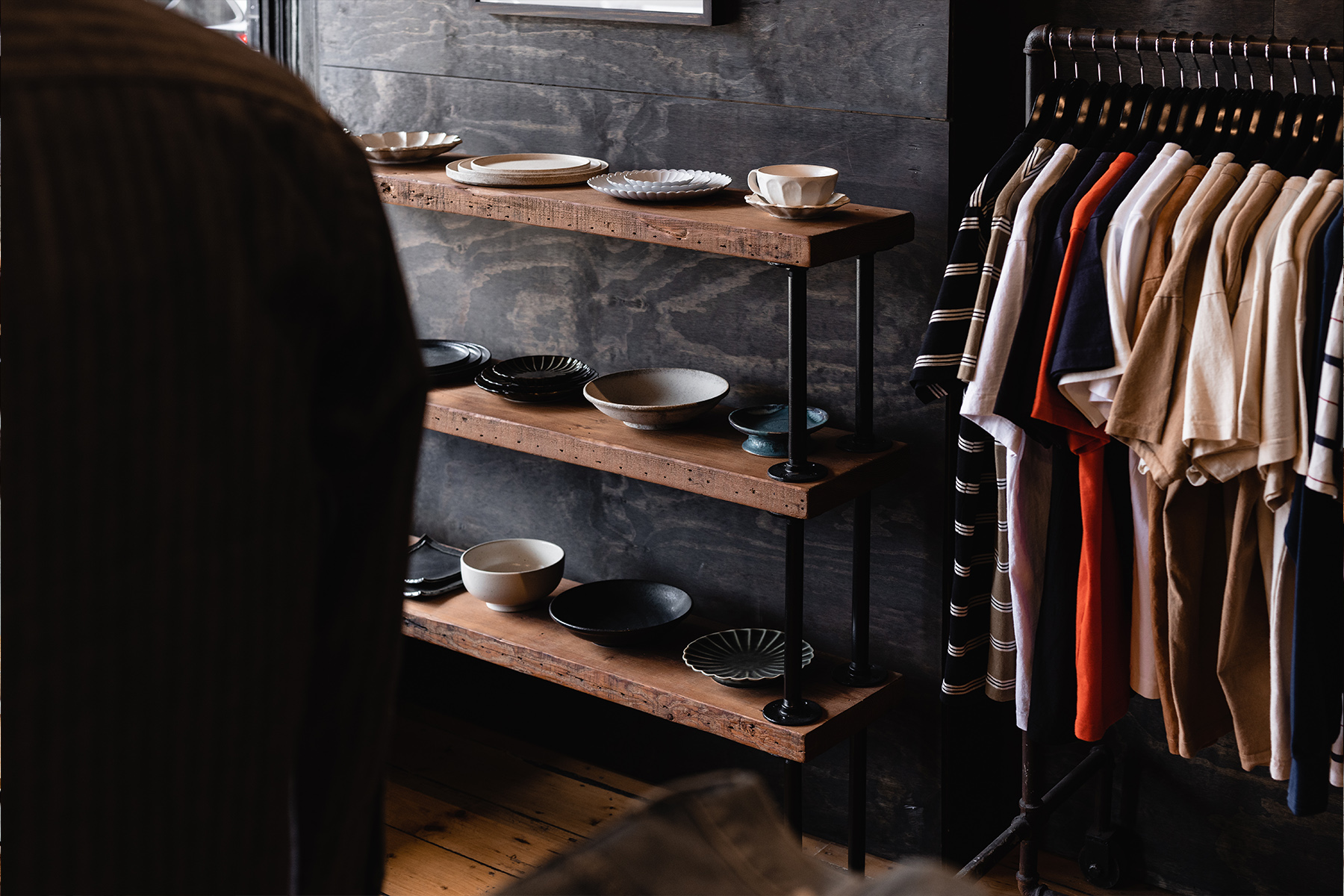 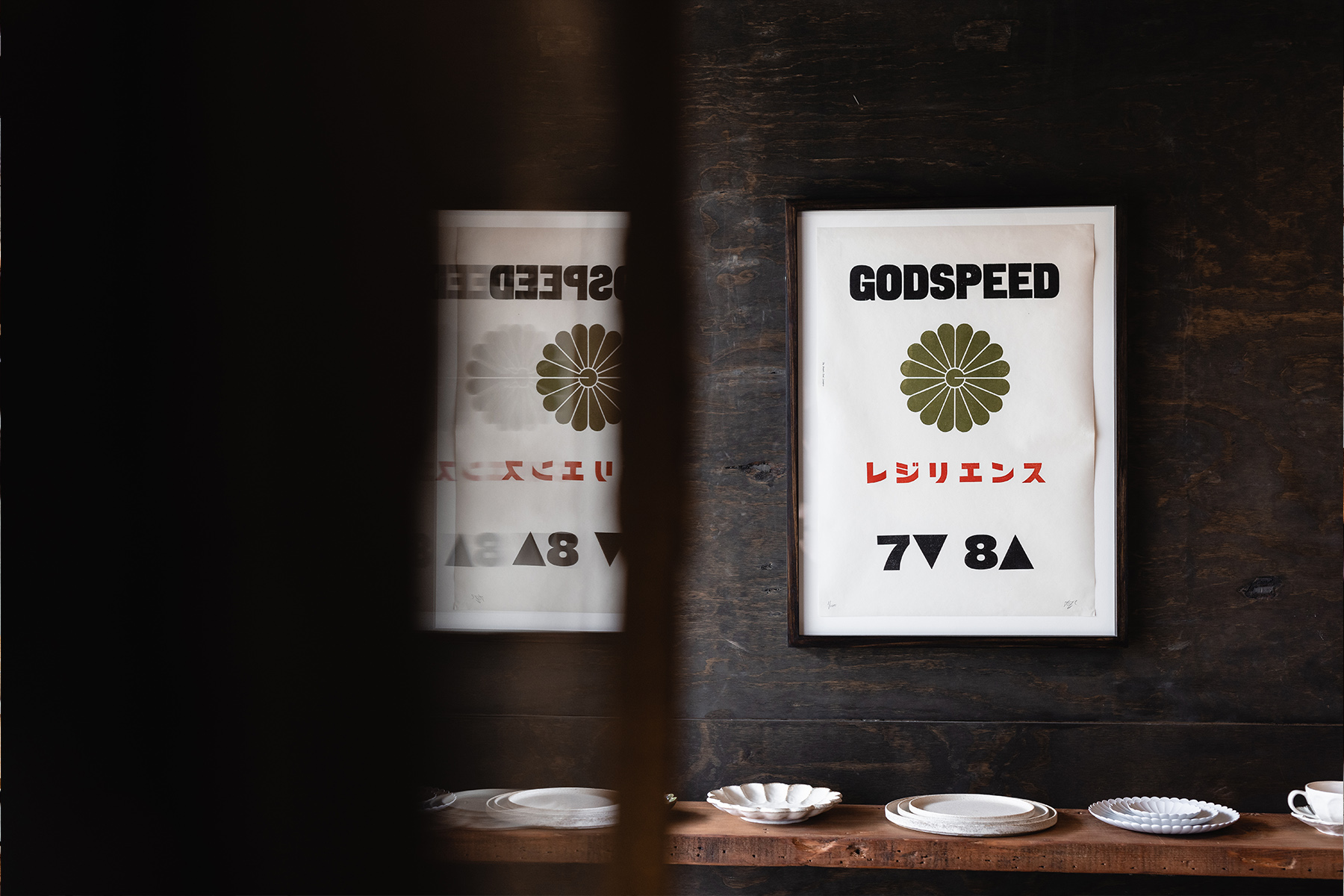 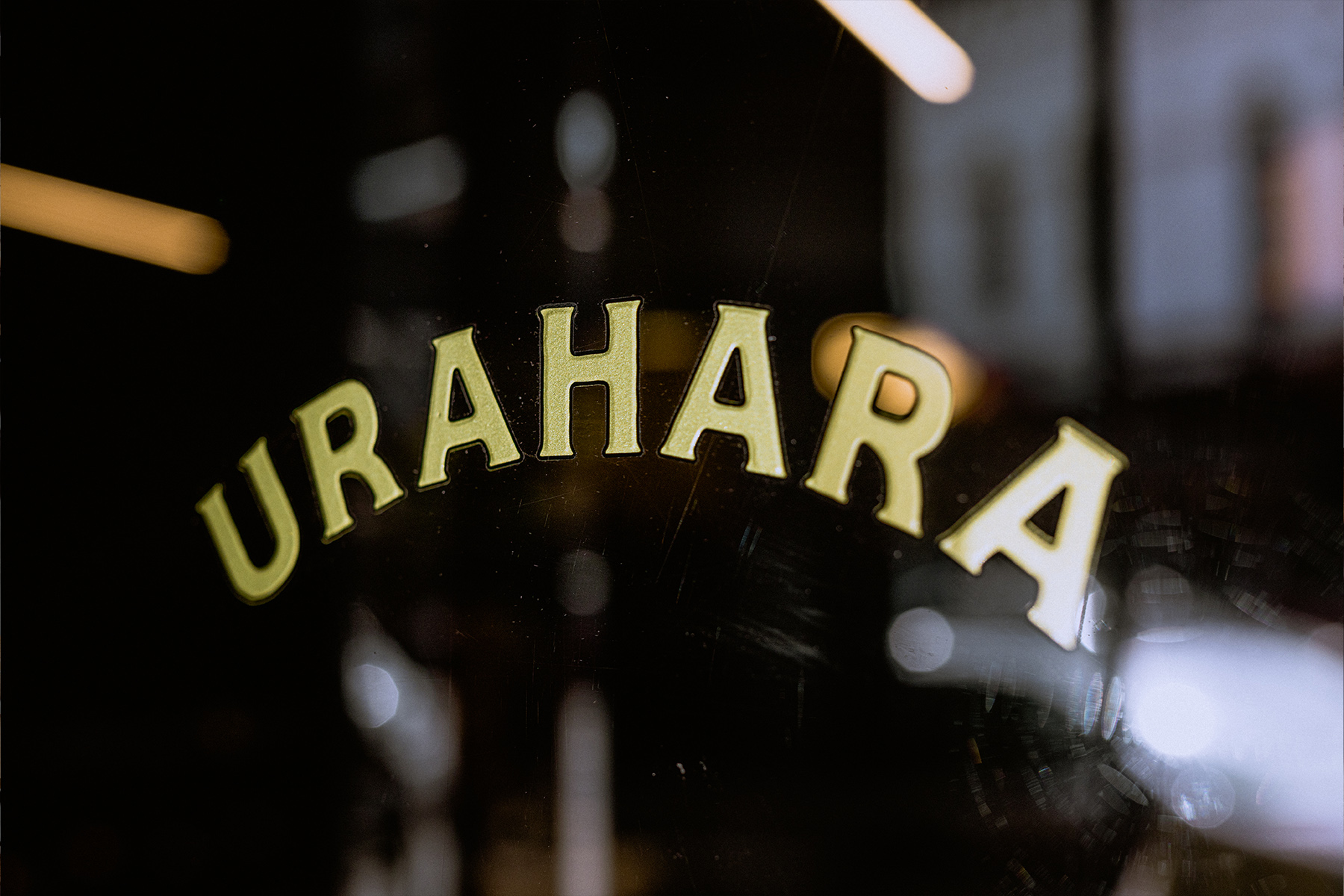 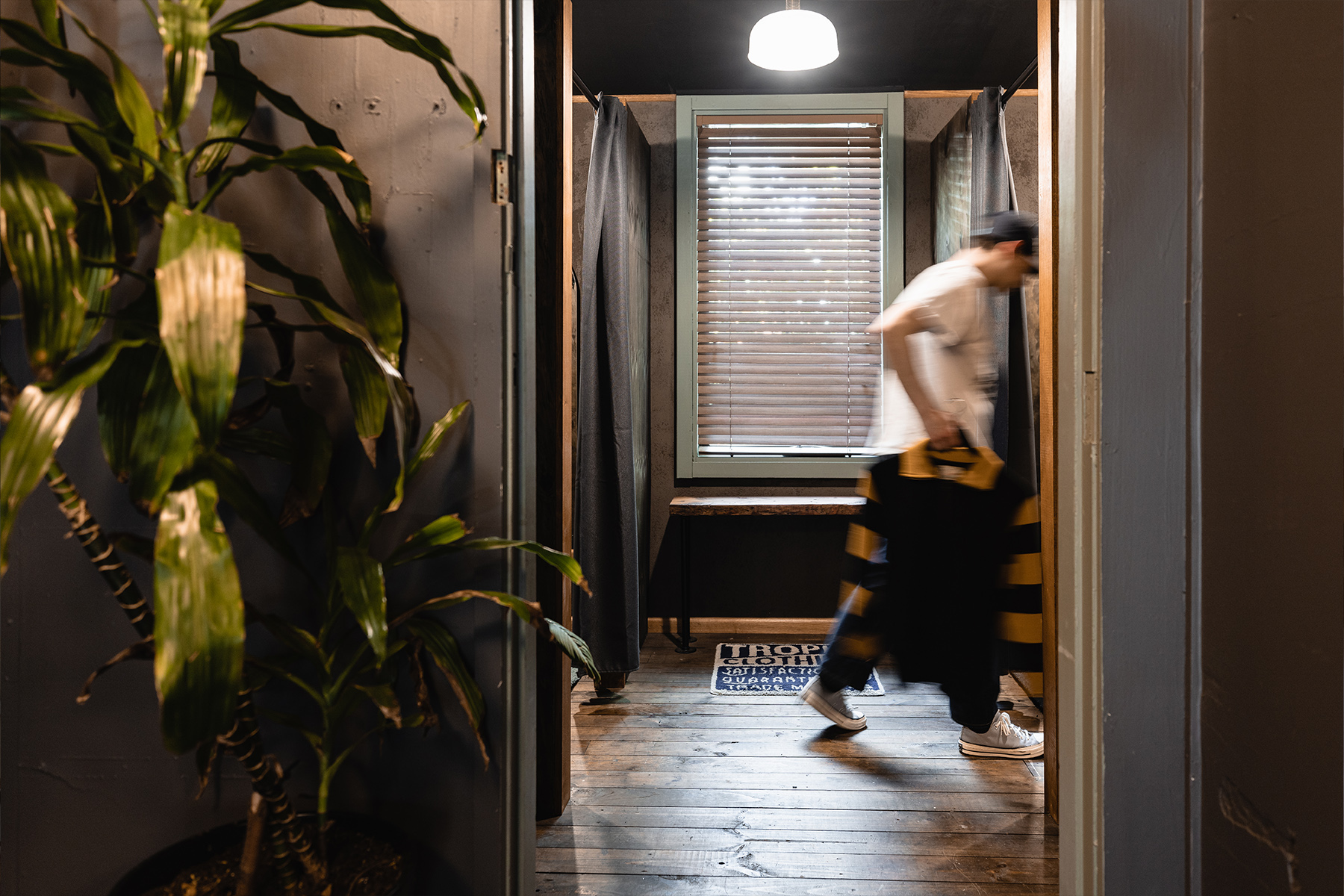 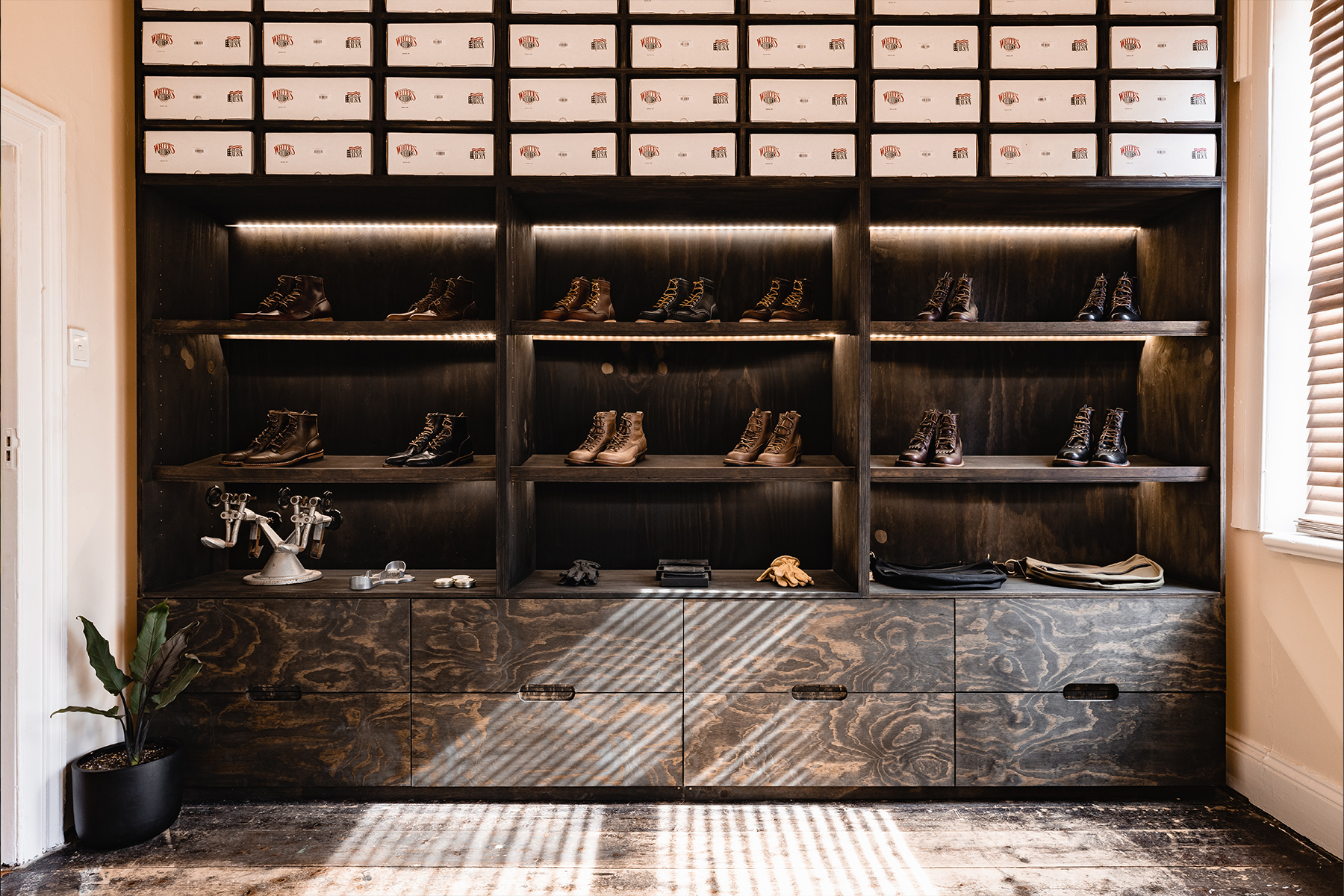 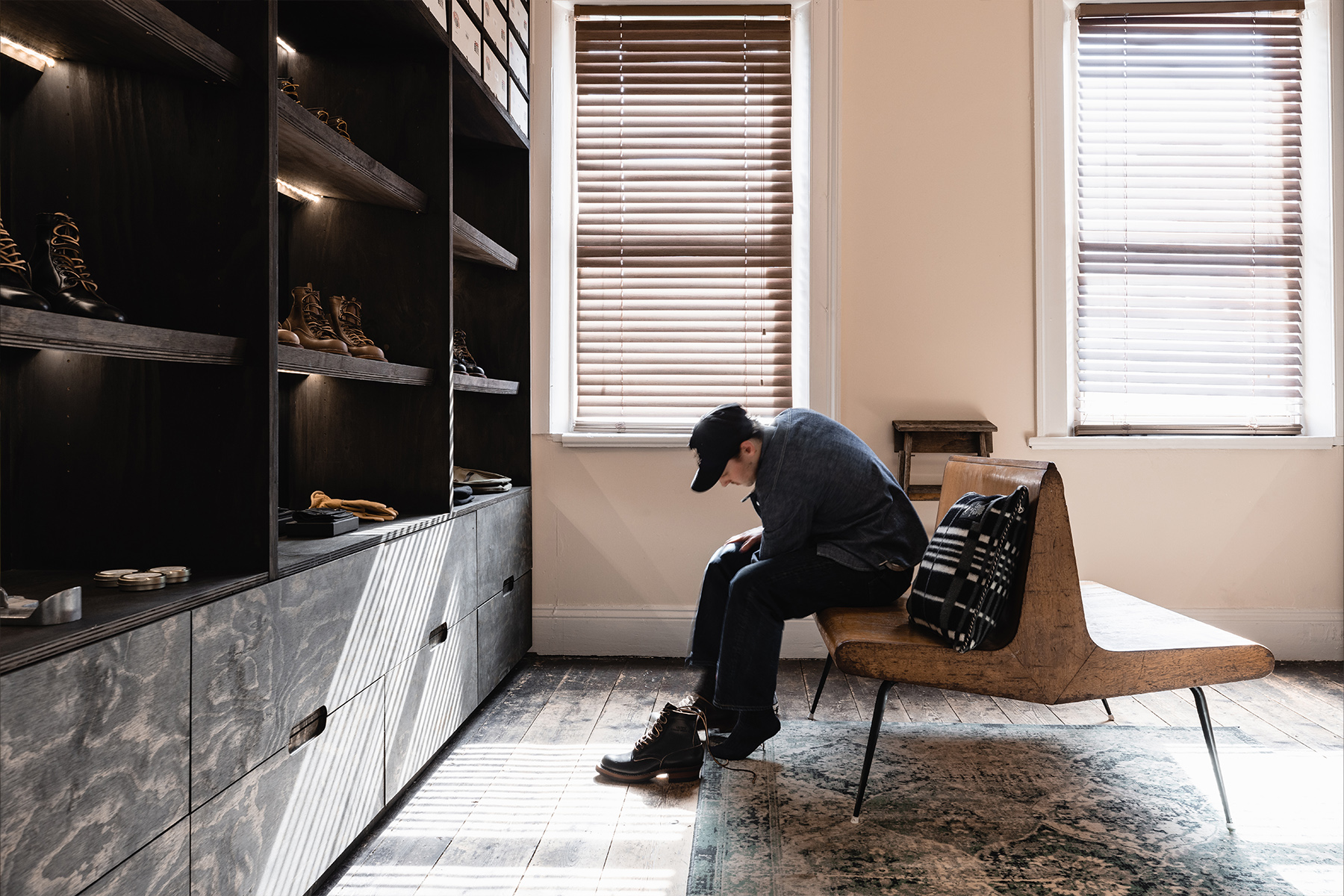 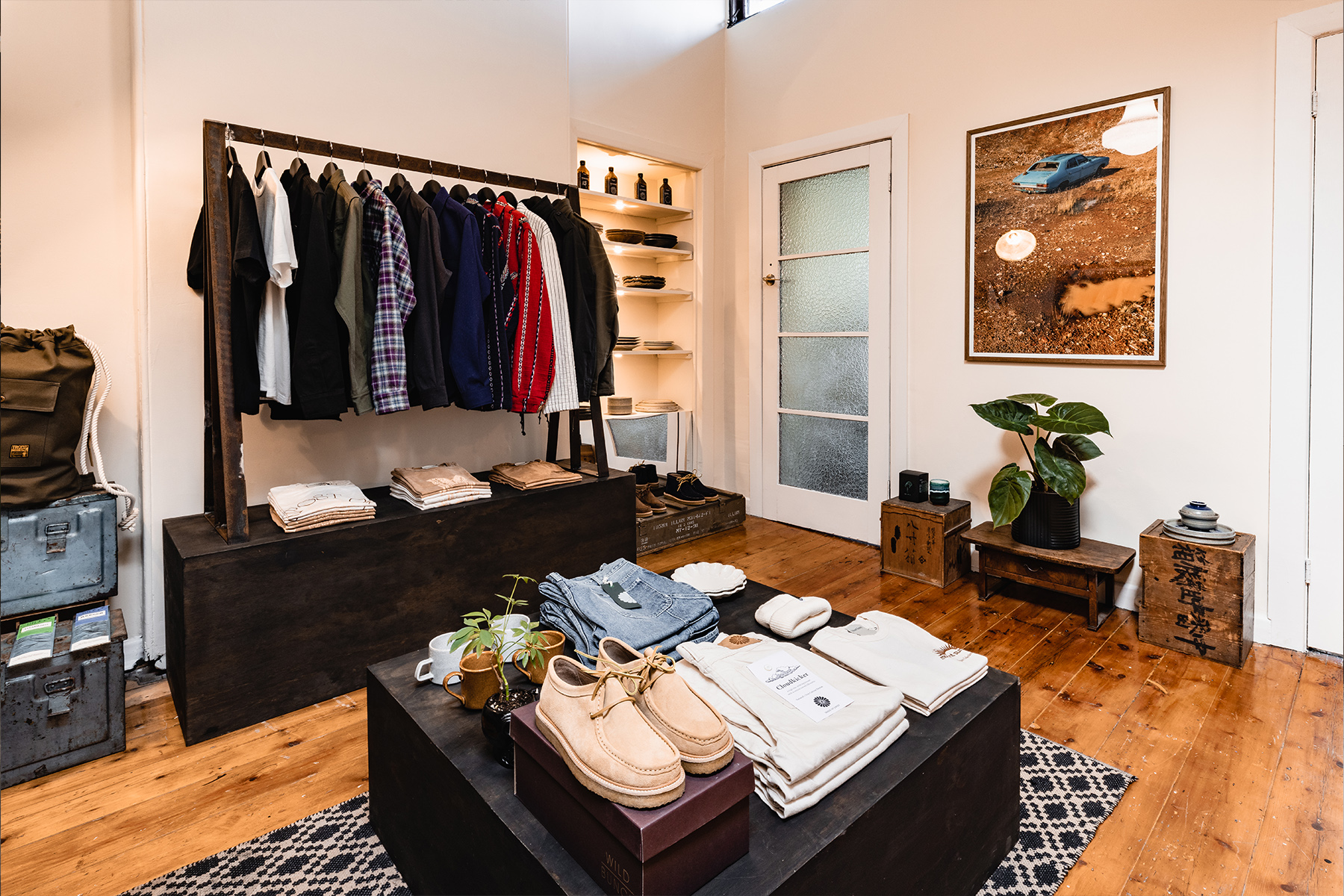 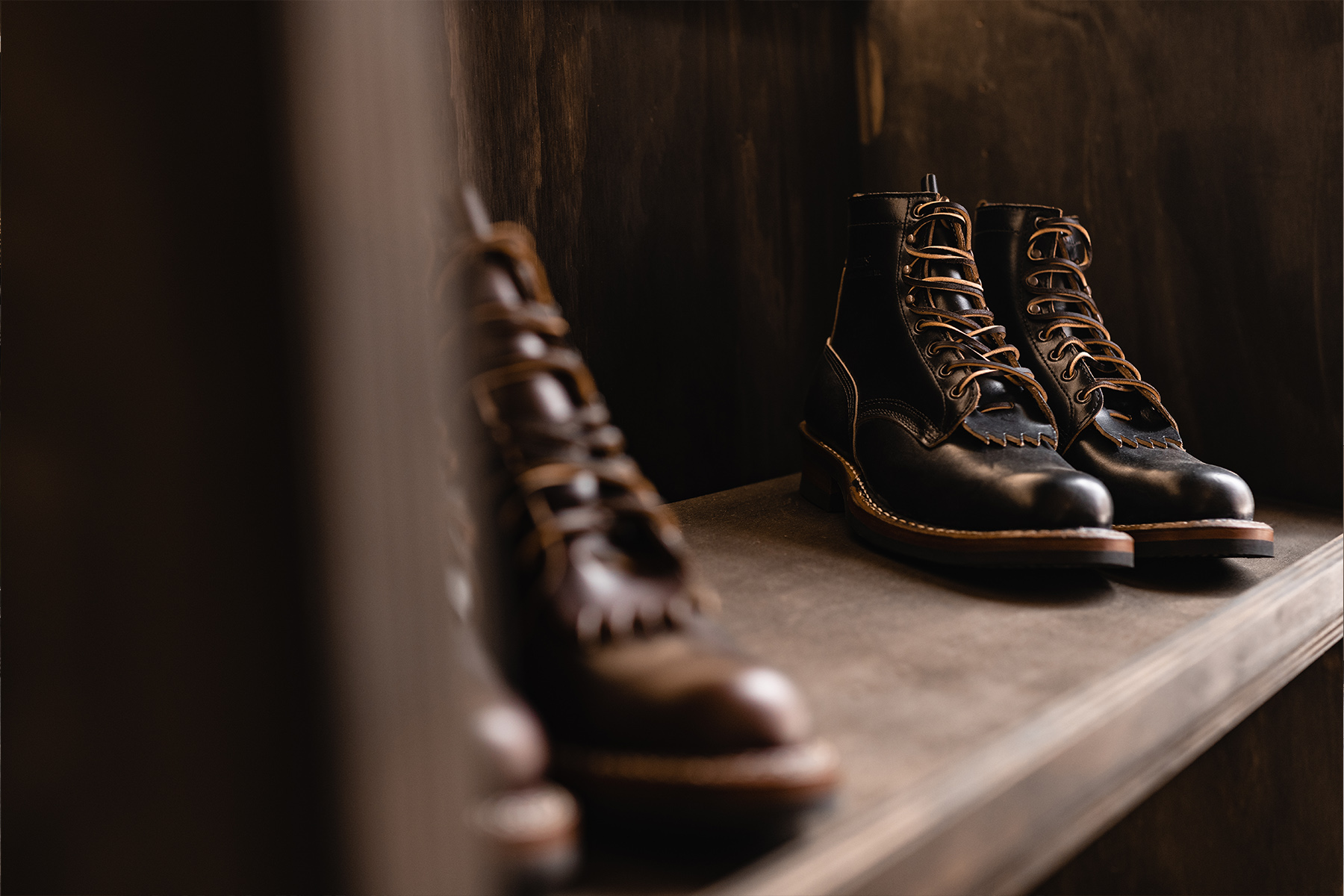 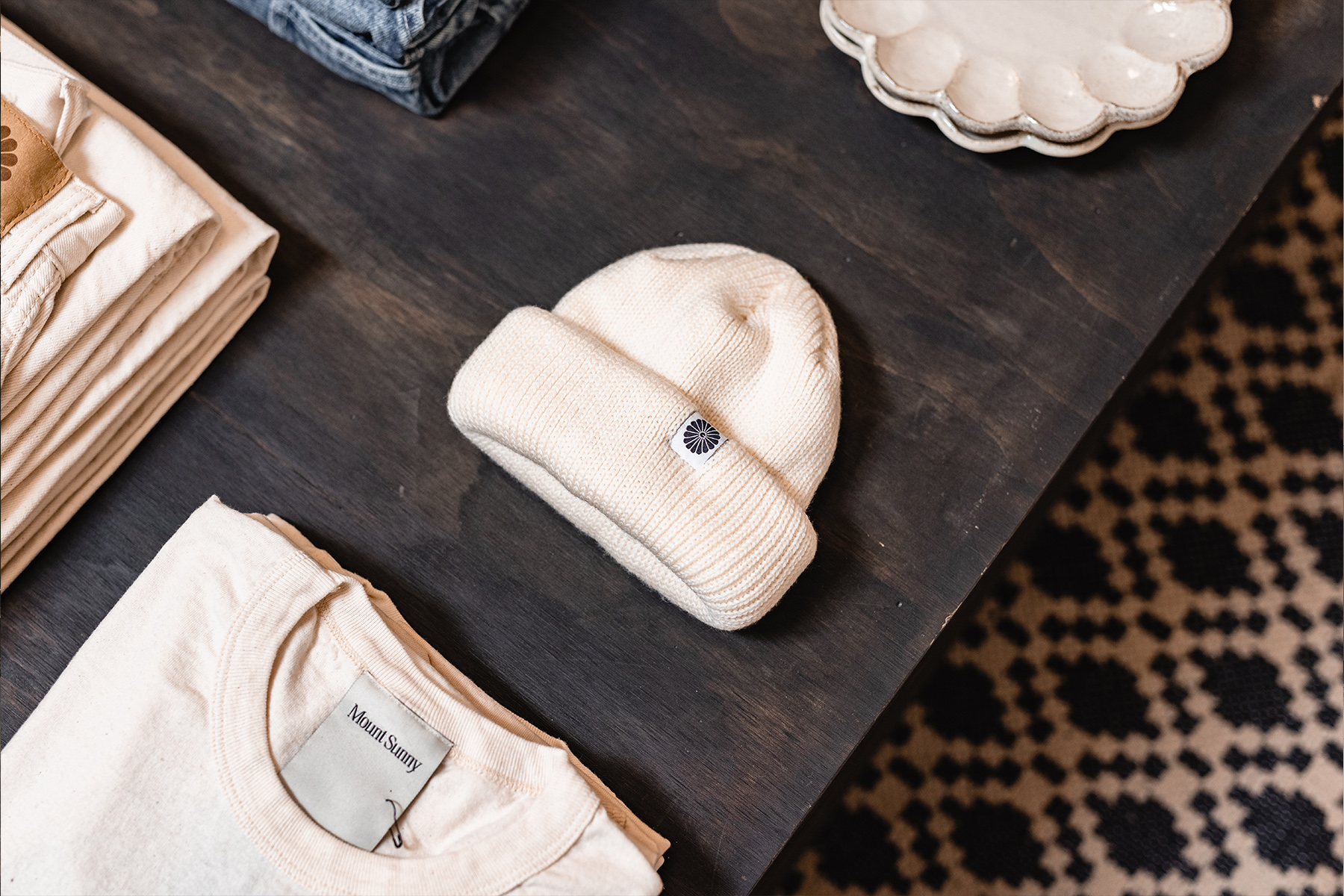